In today´s world of air-conditioned, central heated rooms a fireplace resembles cultivated domesticity. But isn´t it also the facination of fire, which, after all, is the origin of human culture? The typical fireplace of today was unknown to ancient cultures. The fireplace developed in medieval Europe, primarily in the splendid castles of the French aristocracy. The fireplaces were imposing edifices, with huge hoods and walkable hearths. During the 16th century the fireplaces developed further. The model "a la romaine" includes draughts integrated in the wall which reduced the fireplaces size so considerably that even small rooms could be furnished with them. The fireplace has always been the decorative centerpiece of a room. They were constructed in the most representative rooms of the manor; decorated as splendidly with the family coat of arms as the owner could afford it, for they indicated the owners social status. In France, fireplaces were most popular during the 17th and 18th century. In the highly refined life styles of the aristocracy as well as the bourgeoisie of the "ancient regime", the fireplace became a center of social life. One can not imagine the "galant age", nor the literary circles of the "precieux" of the 17th century, nor the readings of the philosophers of the enlightenment in the 18th century without the ambience of people cuddled next to a cosy fireplace. Fireplaces were usually placed directly into the preliminary designs of the architect. The architect then decided which materials to use and about the general appearance of the fireplace, depending upon location and position in the important rooms of the manor as well as social standing of the future owner. The coat of arms disappeared from the mantel piece, to be part of the cast iron hearth. Instead, the materials became increasingly valuable. In the first half of the 17th century sandstone was the principle building material of the fireplace, more or less richly fashioned. The age of Louis XIV introduced marbel. When marbel or porphyry were not sufficently representative, one added fittings of gilded bronze. The most beautiful fireplaces were created in France during the 17th and 18th century, primarily in Paris. The best craftsmen of Holland, Germany and Italy gathered there to join their French colleagues to develop the craft to a new peak. Parisian fireplaces decorated palaces all over Europe, where one can admire them today from Copenhagen in Northern Denmark to Madrid in the Southern Spain. Great architects were often the designers - but the craft was also strictly seperated by guild law, for example the "marbriers en batiments" and the "bronziers-doureurs"; these garanteed the success of the trade. In conclusion, a brief word on the decorative ambience of the fireplace of "yesterday". A mirror was always placed above the fireplace flanked by the light sources of the "Appliques". A clock - a chronometer - was placed on the mantel as a symbol of technical progress, along with several more lamps, pieces of porcellan and "nippes". On the hearth, decorative but practicle fenders prevented glowing logs from rolling out the fireplace. Fireplace tools matching other accessories in style and quality leaned against the mantel. 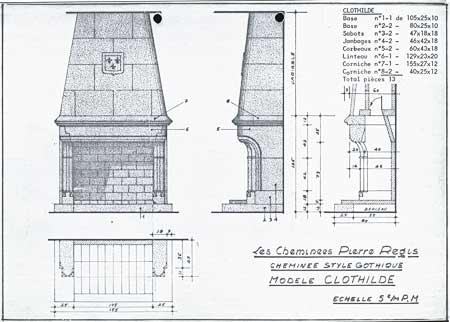 Marbel - Overview We have processed these marbel types, which are being displayed here. Hinweis: The pictured marbel types can be divergent in colour to the marbeling of the real product.